Yesterday Husband and I tackled the green algae that has conglomerated on our patio which is northfacing and never sees the sun. I started off with a cleaner called Armillatox - it was useless - I scrubbed, scrubbed and scrubbed some more. We left it over night - the patio still leered "green" at us. Husband scrubbed on dettol and we both smelt of old fashioned hospitals. Later in the day I was bent double like a giraffe (due to lack of knee bend) and scrubbed away with bleach - lovely job! Bleach and Dettol smells wafted through our clothes and hair - well my hair at least, Husband does not have too much!!!!
Posted by Lindsay at 08:05 6 comments: 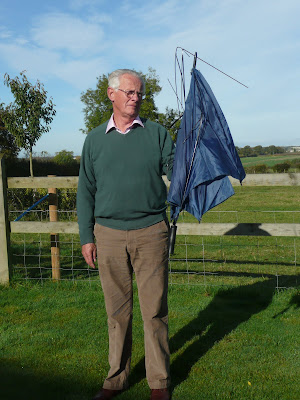 Husband had been looking forward to a nice gentle game of golf with his mates yesterday. The rain - it raineth, the wind - it bloweth!
Posted by Lindsay at 11:30 4 comments:

Labels: Golfing in the rain and wind.

Digging Has Done Me In!

Last saturday Husband and I sauntered down to our local surgery for our seasonal flu jabs. At the ripe old age of 65 (not quite yet) we here in the UK are given, if so wished, a one-off pneumonia jab. I accepted this jab and thought nothing more about it. Later that day I energetically hoed some our of veg plot down the road from our house. My arm went mad with resentment and swelled up from shoulder to elbow in a large hot lump and it is no better today nearly a week later. With two wonky knees as well as a maddened arm I have only one useful limb left! I am getting quite frustrated at not being able to carry out my usual swimming or walking with my crutches - life is one long pain at the moment!
Posted by Lindsay at 15:03 4 comments:

I chatted to Farmer over the garden fence whilst the electric fencing was being checked. He had me cracked up with laughter as he recalled a few narrow escapes with his cows.

To move the cows to their summer pasture apparently can be hazardous, to cause the least confusion they make the move early in the morning to pass through a village. As usual, everyone's garden gates were checked to see if they were shut and look-outs were posted along the route. The cows amble through the village . . . . . . . suddenly a woman in a deep pink nightie tears out of her house, through her garden into the road shouting obscenities complaining her sleep had been disturbed. Ahah thought the cows an open gate and even better an open door into a house! Farmer had to sort out 70 cows confined in a small garden with several inquisitive cows trampling their way through the house!

Another calamity occurred when again the cows were being herded down a narrow lane. A motorist in a Ford Fiesta came upon the herd but instead of calmly waiting for the cows to amble past, the driver surged his way forward eventually grinding to a halt. The motorist wound down his window to loudly and rudely complain when all of a sudden the bull (a placid fellow I am told) came upon a nice scratching post and stuck his head through the car window. There were screams from inside the car as it was rocked too and fro with the windscreen falling out - the bull was having a good time rubbing his itchy head against the window frame. Farmer had to wrench the passenger door open and dive over both passenger and driver to push the bull out!

I must not laugh too loudly in case the cows decide to burst through into our garden - I would not be too happy!
Posted by Lindsay at 14:33 11 comments:

We have had to call Mole Man twice within the last two months - the moles are playing games with us. Mole Man catches one mole and says he has finished and there are no more moles - well we know different! It is expensive = £126.50 each batch of visits. I am fed up with this! Mole Man is in the process of trying to catch the elusive mole(s). On his last visit I pretended to be very very interested in mole behaviour and whilst Mole Man was giving his mole monologue I was craftily looking how he set the traps! I have now visited a website and bought three traps for £12.50 and as soon as Mole Man finishes this current session I shall take over and lay traps myself! Husband is too scared.

If I suddenly stop posting on this blog you will know I have trapped not a mole but my fingers!
Posted by Lindsay at 11:47 4 comments:

It has been a glorious autumn day here - in the afternoon I followed Husband around the golf course. A National Grid helicopter was hovering around the nearby pylons - it looked very tiring precision work. After Husband had whacked his way around the course, on the spur of the moment we decided to have the usual cup of tea and bun at AV8 cafe on Kemble Airfield. We arrived just in timeto see the same helicopter land, refuel and lock up for the night, but the real sight was a half inflated hot air balloon just about to take off for a joy ride - it had Triumph Underwear emblazoned along its bulbous sides. Husband guessed a modest 38C whilst I went for 44DD! We were very amused to see it's call sign was "G-KNIX" !!
Posted by Lindsay at 17:01 1 comment: 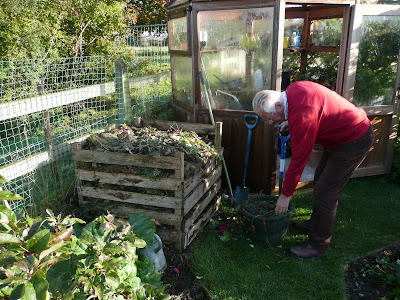 When my Brother, Jamie, visited us last November (he lives in Australia) he packed in his suitcase a couple of leafy twigs from his garden to start off our compost heap! Husband is seen here removing the top layer in preparation to dig out the heap onto the veg garden. 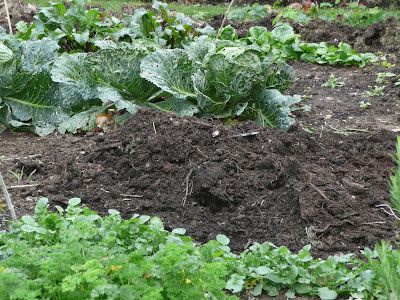 You can see the result - (oops, a lot of rose twigs, naughty me adding them to the heap over the summer).
If you like puppies please visit my brother's blog (see link above).

We Were Very Naughty!

The scene of the crime was at "The Local" during the monthly quiz night. All teams were handed out, as usual, the picture round and the theme for this was identifying films. The Street Walkers team are absolutely rubbish at films. To our amazement we were handed out the sheet of paper that included the answers which had been blanked out with tippex. Well, what would you have done? I had on my person a torch and we used our initiative (very admirable we thought) and shone the torch through the blanked out areas and we were then able to read the answers!

We thought the Quizmaster would be impressed for an instant and then he would realize something was amiss because to date we have usually come last being unable to answer many questions on films, pop music and TV. We were rumbled very quickly by the team marking our papers, but despite the marks being deducted we, unusally, tied for first place. The tension mounted as a decider question was asked, but blow me down - the subject was films!!! In the circumstances the right team won.

I think we may be banned or perhaps we had better settle for coming last - oh, no, no no, the boobie prizes are brilliant so that would not do at all. The Street Walkers will try their very best to come second last next month!
Posted by Lindsay at 07:49 10 comments: 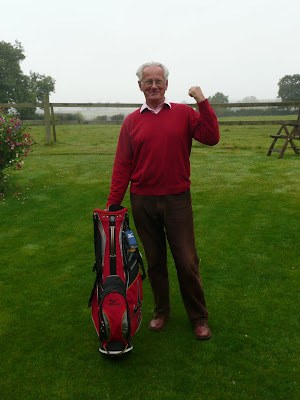 Yesterday he and his 3 other partners in crime were invited to play in a company/charity golf day. Husband used to own this company (son, then about 10 years old thought we would be "rich"???? - I think not!) . The present owner invites the four old lags back every year for the golf - I expect never thinking the old boys could ever win anything! Husband and his partner came second and won a golf bag each. (Sigh) methinks yet more clutter in the garage!
Posted by Lindsay at 09:01 5 comments: 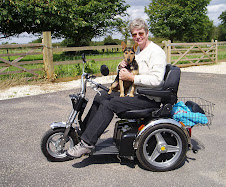